Shrimp is the most consumed form of seafood in the United States as per USDA 1. It is one of the staples of a typical American diet. From appetizers to salads and everything in between shrimp will complement almost any dish. With such an enormous range of possibilities when cooking with shrimp there is only one question left: which is better, farm raised or wild caught shrimp?

There are a few different things you should consider when trying to determine which shrimp is better. Like how the types of shrimp differentiate in taste, how the choice impacts your health and the environment. You’ll also want to know how you can determine if the shrimp you’re looking to purchase is farmed or wild caught. This way you can buy the shrimp of your choice.

Keto Diet Tip: Some shellfish contains carbs but not shrimp making them a great choice for a low-carb diet. One of the biggest reasons for failing a Keto diet is not having a plan. Simply follow this plan for only 28 days, The 28-Day Keto Challenge and you can Succeed!

The omnipresent misconception is that wild shrimp is better tasting however there is no real difference in the flavor. There were a few cases in which wild shrimp was noted as different tasting, due to wild shrimp’s diet. Many believe that this misunderstanding was developed due to the hefty price of wild shrimp. 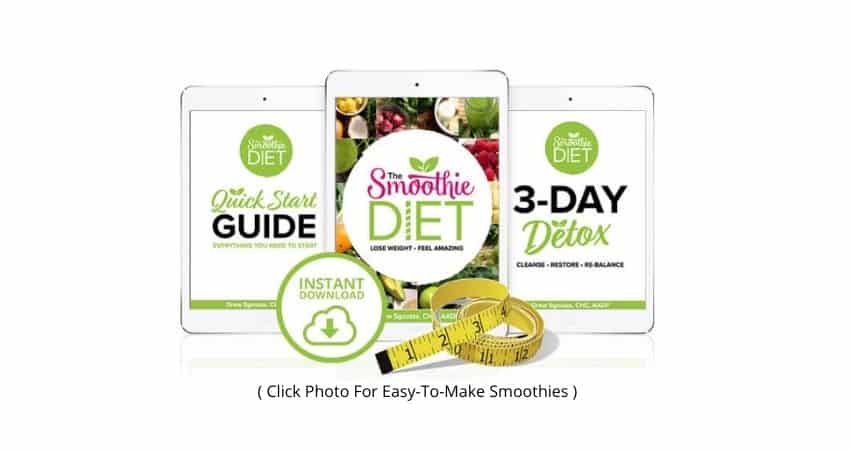 The only nutritious difference between the two types of shrimp is farmed shrimp is rich in omega 3 acids 2 while the wild shrimp is known to have fewer saturated fats. This is due to their diet and the amount of activity the shrimp are able to have since they are not confined to a space. Because of these properties, chefs around the world prefer wild shrimp.

Unfortunately, due to this misconception, wild shrimp is more expensive than its farmed counterpart. The middle ground would be frozen or canned wild shrimp. This is a bit more budget friendly however many avoid this option since it affects the texture of the meat. Amazingly enough, wild caught shrimp is sold on Amazon. Check out their prices by clicking here, Wild caught shrimp.

Either way, shrimp has a variety of health benefits as it is rich in vitamins, minerals and is a great source of protein. All of this promotes cardiovascular health 3 and the omega 3 acids are good for brain activity. It also affects triglycerides and blood pressure levels lowering them significantly in comparison to people who don’t consume any shellfish 4.

Is Farmed Shrimp Bad for You?

With wild shrimp, the biggest concerns are contaminations caused by pollution and higher levels of mercury. Other than these there are not much you should worry about and wild shrimp should be free of any other kind of chemicals and drugs. Scallops, another seafood favorite may be different. You can find out in my blog post, Farm-Raised Vs Wild Caught Scallops: Which Seafood is Best?

There is a bit more concerns with farmed shrimp. The sources of the concern with farmed shrimp are the unmonitored farmers with unethical practices. Due to the big population of shrimp with these farmers, there are bigger possibilities for the shrimp to contract different illnesses. To prevent this, farmers often use a type of antibiotics inside the tanks 5.

This was studied as a way of promoting AMR (antimicrobial resistance). This can cause you to be more resistant to the effect of medication on different infections and microorganisms 6. This practice is used with different seafood and is a growing problem as it is estimated that it kills around 29,000 Americans a year.

Another concern is the way tanks are cleaned. Many shrimp farmers are known to use different chemical agents to control the number of bacteria, fungi and other pathogens inside the tank. This can cause the farmed shrimp to be higher in contaminants. In addition, the chemical agent can leave a thin film of the cleaning solution on the skin of the shrimp. This may cause many different health issues, depending on the amount ingested.

What is Better for the Environment: Wild Caught or Farm Raised Shrimp?

Wild shrimp comes mostly from the ocean 7. Some laws in place regulate shrimp extraction to avoid overfishing. However, there are still many concerns regarding these practices most notably the issues with bycatch (other fish that get caught unintentionally) and the damage caused by trawling.

The fishermen catch shrimp using nets. Since shrimp are relatively small, the spaces in the net have to be smaller to catch the shrimp. Since most fish are at least the same size, if not bigger than shrimp, they get stuck in the net 8.

Since the process of extraction is relatively long, the other fish caught in the net dies. There is too much time between the moment the nets are raised from the sea and the moment other fish is returned to the sea. According to the Monterey Bay Aquarium, there is on average 6 pounds of bycatch for every pound of shrimp. This significantly affects the other species in the ecosystem 9.

On the other hand farming, shrimp is much more sustainable. The increase in the number of shrimp farms counteracted the effects of overfishing. The high demand for shrimp combined with laws that were put in place to avoid overfishing prompted many to venture into the business of farming shrimp.

Starting is relatively easy since all you need are tanks, food, and an enclosure or outside space with some sort of a roof to keep tanks at. This type of business mostly located in China, India, Thailand, and Indonesia helped locals by creating more work for them.

Many reputable shrimp farmers make sure to take good care of their shrimp, surrounding environment and employees. Unfortunately, many others take advantage of this easy opportunity to make some profit. This often leads to labor issues.

The untrustworthy farmers have their tanks and ponds overpopulated and not taken care of properly. They are known to use steroids and growth hormones to make their shrimp larger. In addition, they dye them a pink color to pass them off as wild caught shrimp.

This practice enables them to sell more shrimp and reap bigger profits. Shrimp tanks are often kept clean using chemicals rather than cleaning them daily which affect nearby ecosystems and water.

Where do Wild Caught Shrimp Come From?

Wild caught shrimp are ones that are caught by fishermen from their natural habitats in the ocean or other bodies of water. Since shrimp are scavengers, they live on the bottom of the body of water or, in cases of smaller shrimp, inside other organisms like sponges 11.

Most of the wild caught shrimp come from warmer waters like the Gulf of Mexico and Pacific coasts of Central and South America.

How Can You Tell if Shrimp is Wild Caught?

If you prefer one type of shrimp over the other, there are a few ways you can go about determining which one it is. While buying your safest bet is getting packaged ones and determining where the shrimp comes from. Make sure the package includes a certification if you are buying farmed ones 12.

If you prefer shrimp not prepackaged, your best clue will be the color of the shrimp. The color of the shrimp, like many other sea creatures, are determined by their diet. The shrimp diet in the ocean consists of clams, snails, and dead fish. This diet provides them with antioxidants which in turn cause their signature pinkish color.

On the other hand, farm raised shrimp are fed soybean meals and other plant based products. This will cause their color to turn gray.

Another thing to look out for is the size of the shrimp. Usually, wild shrimp will not grow too big in size, so if you find large shrimp, chances are they are farm raised.

This process can be a little bit harder once you are eating out, however, if you ask you will usually get the answer. Supermarkets and restaurants are required to trace back their suppliers and if the information is not presented to you on the menu once you ask they will tell you.

After carefully considering all of the above, both types have their positive and negative sides. That being said, wild caught shrimp is a better choice.

Wild shrimp can be easily traced back through the fishermen company. This provides a way for you to know where your shrimp comes from. These companies are also regulated regarding the way they conduct their business. This makes them better for the environment and more sustainable than the majority of shrimp farms.

In addition, all these positives probably make my mind and taste buds think the wild caught fish tastes better. Writing this article actually made me hungry for a healthy seafood dish with some shrimp thrown on top!

Legumes Vs. Nuts: The Differences 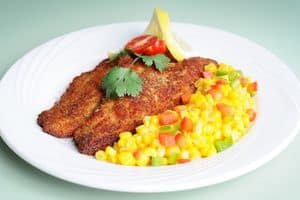 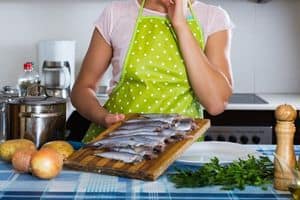 Herring and sardines look similar and are from the same family. For this reason many people wonder about their differences. Let’s answer the question, what is the difference between herring and sardines? Herring provides a higher percentage of B vitamins and omega-3 fatty acids but less minerals than sardines. Sardines tastes fishier, oilier and saltier than… 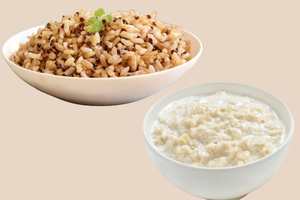 As a Certified Health Coach many clients ask me about healthy foods like brown rice and oatmeal. They both have many nutrients but can differ in the numbers. This causes many people to ask, what is better, brown rice or oatmeal? Oatmeal is better than brown rice due to its fewer calories, carbohydrates and sugar…. 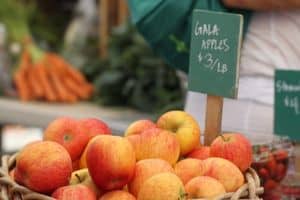 Each apple variety has a signature taste, texture and color. Two of the most popular varieties are Gala apples and Empire apples, which have unique characteristics. Therefore, what are the differences between Gala and Empire apples? Empires are sweet and tart while Gala is sweet with no tartness. Gala’s texture is soft and crisp while… 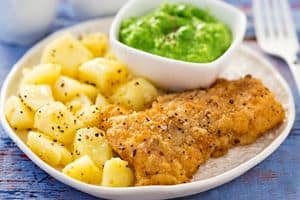 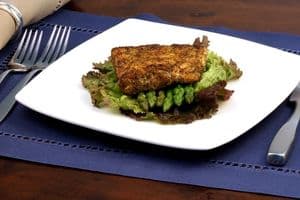 Sea bass and cod are two popular fish people love to cook with. They both have different tastes, nutritional values and textures. When deciding for your next meal, you may wonder, what is the difference between cod and sea bass? Sea bass is sweeter than cod and has a meatier texture. Sea bass provides a…