Part of my job as a Certified Health Coach is to inform people about healthy oils. Olive oil and soybean oil are two oils commonly mentioned. A typical question asked, is soybean oil better than olive oil?

This article will start with the differences between the two oils. Then I’ll include a side-by-side nutrient comparison and their health benefits. In addition, I’ll take a close look at whether one can substitute for the other, their prices, tastes, smoke points and storage.

They’re both cooking oils but what is the difference between olive oil and soybean oil?

In the United States, most of the oils labeled vegetable oil are actually 100% soybean oil. I checked the labels of vegetable oils sold in Walmart, Shoprite and Stop and Shop, and found this to be true.

Manufacturers do this for marketing purposes. In addition, it gives them flexibility to change the ingredients and not the label. This variety is a good substitute for the manufacturers to use due to the scarcity of other vegetable oils.

Soybean oil is made by the following method:

The following table compares the nutrients contained in one tablespoon of olive oil and soybean oil:

The number of the nutrients in the table above may differ depending on the manufacturer, time of year, olives used and other factors.

At first glance the nutrients for each oil may seem very similar. This brings up a question often asked, which is the healthier oil?

Let’s take a closer look at each nutrient and how much more each oil contains. 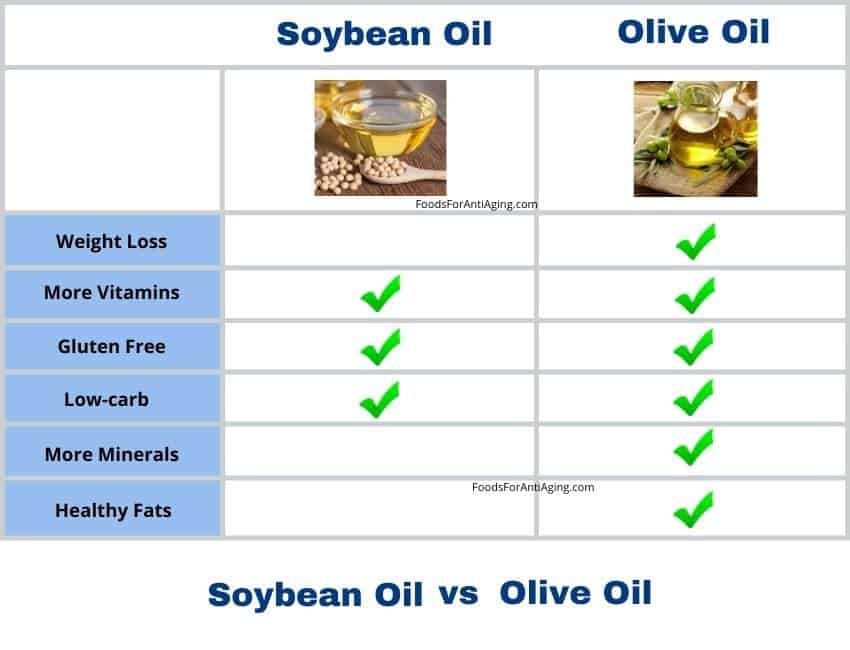 Let’s face it, If you’re like me I won’t eat a food considered healthy unless I can tolerate the taste. I think if someone doesn’t like the flavor of a food they won’t purchase it.

I wanted to get the opinion of real people like you by conducting some original research. Therefore, I reached out to some clients, members of food groups and readers. I asked, which oil tastes better?

In the battle of taste, olive oil tastes better than soybean oil and was the winner in the poll.

I think it’s happened to all us, at the last minute you find out you’re out of the oil needed in a recipe. Unable to go out to the store or just don’t want to, you’ve probably wondered if you can use another one in its place.

Reasons why people will want to substitute one for the other in a recipe:

This makes people wonder is it okay to use one for the other?

The following are the smoke points for olive oil and soybean oil:

The oils more refined or processed always have a higher smoke point than virgin oils.

Some people like using soybean oil because it doesn’t overpower the other flavors in a recipe and it is cheaper to purchase.

Using it results in a neutral flavor and more people use it for cooking or baking than for dipping, salads or drizzling.

Use soybean oil for the following:

In this section I examine the most common goals people have and determine if one of the two is the better choice for each one.

The goal for most low-carb diets is consuming few carbohydrates while adding more healthy fat and protein. With such a restrictive carbohydrate intake, every gram of carbs may make a difference.

Therefore, let’s examine which one has fewer carbohydrates or more fat and protein.

Weight loss may be the most popular goal. If you’re trying to lose extra pounds from the midsection area, the number of calories may matter to you.

It should be noted to be careful about how much is added to a dish like salads. It’s easy to add multiple tablespoons. At 119 calories per, adding four tablespoons would equal 476 calories. Always be aware of the number of tablespoons and try not to overdo it.

Olive oil and soybean oil are plant based and does not contain animal products making them both beneficial for vegans and vegetarians.

If you’re trying to gain muscle mass or just tone up, the amount of protein and carbohydrates may make a difference. Let’s take a look at both and determine which is better for bodybuilding.

Although olive oil and soybean oil contain the same number of proteins and carbohydrates, olive oil is better for bodybuilding. This is due to its higher percentage of healthy fats and antioxidants. 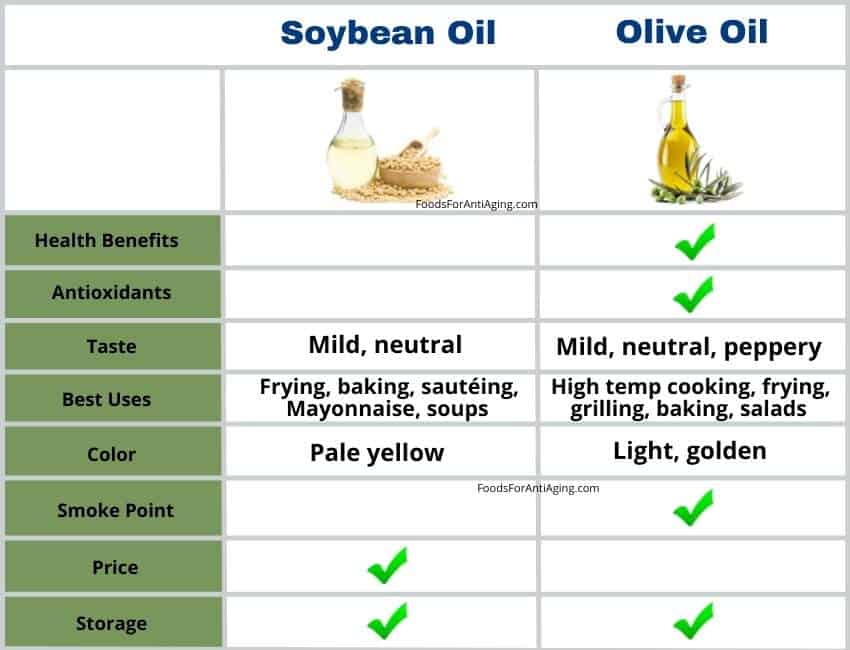 Its seems every trip to the supermarket results with more money spent at the checkout. For this reason and others, I’m sure the prices of food matters to most people.

I checked the price of store brand oils to keep things on an even playing field. I divided the price by the number of ounces. Therefore, let’s examine the prices of both.

In Shoprite their vegetable oil was labeled the same. They did have a Goya brand soybean oil selling for $0.16 per ounce.

For further explanation about why many vegetable oils contain 100% soybean oil read about it in my article, Olive Oil vs Vegetable Oil: Which is Better? Let’s Compare.

Storing food often gets overlooked. The shelf life you get out of the oil is important, especially with the prices of good quality brands. In addition, improper storage may lessen the taste and quality.

Let’s examine how they should be stored.

Store soybean oil or olive oil the same way which is in a cool, dark location away from light. It’s best to store them in a tinted glass container. Both oils should be kept at a temperature between 55-60℉, although they can be refrigerated or frozen if needed.

If the temperature of a room rises above 70℉, they should be stored in the refrigerator. Leaving either oil in warmer temperatures affects shelf life and lessens the quality.

Unrefined or extra virgin can go bad quicker than refined oils. For this reason, many people store them in the refrigerator regardless of the room temperature.

Kitchens are often warmer than most other rooms of the house due to cooking and the heat-creating appliances. Therefore, monitor the temperature of the room to ensure the best quality.

Both of them contain healthy fats and antioxidants which provide many health benefits. This section will examine those benefits for each one and the drawback of soybean oil.

Soybean oil has some benefits of its own and also some concerns if consumed too much.

Soybean oil contains a good number of monounsaturated fats. These fats are extremely beneficial for the heart and increasing good cholesterol.

The high percentage of Omega-3 fatty acids is beneficial for the heart.

DHA and EPA, two of the fatty acids, are associated with lowering blood pressure and improving the health of blood vessels 9.

However, nutritionists have raised concerns about the high amounts of omega-6 found in some vegetable oils like soybean. Although omega-3 and omega-6 fatty acids are needed, many people consume too much of the omega-6 and not enough omega-3s.

This is so because processed foods are typically high in omega-6s. An imbalance between omega-6 and omega-3 may lead to chronic inflammation.

Moderation is the key and it’s better to use when it makes sense.

One tablespoon provides approximately 20% of the daily recommended value of vitamin K. Studies have shown vitamin K is necessary for the synthesis of proteins beneficial for maintaining bone mass 10.

Heart disease is among the most common causes of death in the United States and throughout the world. Research has shown heart disease is lower in the Mediterranean countries where olive oil is a big part of their diets.

There are many ways olive oil is beneficial for the heart including the following:

Its been shown to help improve the lining of blood vessels. A study published in 2015 showed blood vessels opened up and increased blood flow in people who included olive oil in their diet 13.

It is associated with decreases in inflammation which is a main component of heart disease. An antioxidant in olive oil, oleocanthal, is an anti-inflammatory that also reduces pain.

The cancer rates in Mediterranean countries are lower than other places. As noted earlier, this type is a huge part of the diet.

Antioxidants are believed to contribute to the killing of cancer cells. In a 2015 study, oleocanthal, a phenolic compound present in olive oil, helped kill cancer cells in less than one hour 14.

After 4.8 years 35 of the women developed breast cancer. The lowest rate of breast cancer was seen in the women who supplemented with the extra virgin olive oil 15.

Research has shown the Mediterranean diet may be associated with a reduced risk of cognitive problems and dementia 16.

Alzheimer’s disease is the most common form of dementia causing problems with memory, thinking and behavior. A common feature of the disease is the build-up of proteins known as beta-amyloid plaques in certain neurons in the brain.

Animal studies have shown it to clear the beta-amyloid proteins from the brain helping to prevent Alzheimer’s disease 17.

Grapeseed Oil vs Olive Oil: Which is Better? Let’s Compare

Butter vs Olive Oil: Which is Better? A Complete Comparison

Sunflower Oil vs Olive Oil: Which is Better? Let’s Compare