During my health coaching sessions many people ask about healthy foods including oils. Sesame oil and olive oil come up in conversation frequently because of their benefits. The questions quickly lead to this one, is sesame oil better than olive oil?

This article will include a side-by-side nutrient and fat comparison of the two oils. I’ll examine how each oil is processed and their differences. In addition, I’ll take a close look at their tastes, whether one can substitute for the other, prices and health benefits.

Sesame oil is made by the following method:

The following table compares the nutrients contained in one tablespoon:

The nutrients in the table above may differ at times depending on the manufacturer. This may be due to the time of year, olives, when the they were pressed and other factors.

The number of nutrients between the two oils are similar. This may make some people wonder which is healthier?

Sesame oil is healthy also and contains a good number of healthy fats and antioxidants.

Let’s take a closer look at each macro and nutrient closer. 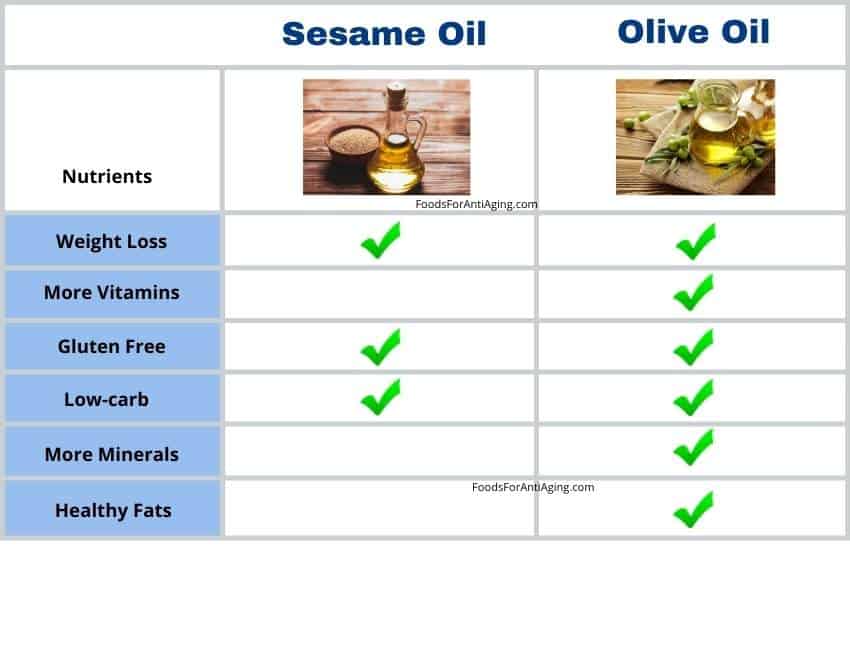 Sometimes the taste and texture is all that matters to some people. After all, if someone doesn’t like how a food tastes, they will probably choose to leave it out of their shopping cart.

Both toasted sesame oil and extra virgin olive oil has a stronger flavor.

I wanted to get the opinion of real people like you by conducting some original research. Therefore, I reached out to some clients, members of food groups and readers. I asked, what tastes better?

In the battle of taste, olive oil tastes better than sesame oil and was the winner in the poll.

Have you ever wanted to try a new recipe the last minute and found out you didn’t have one of the ingredients at home? Unable to go out to the store, you’ve probably wondered if you can use another ingredient in its place.

Availability is one reason people will want to substitute one food for the other in a recipe. Other reasons for doing this may include the taste, price, smoke point or just for variety.

This makes people wonder if they can substitute sesame oil and olive oil for each other.

Sesame oil and olive oil can substitute for each other in cold or hot recipes due to their similar smoke points. Although the flavor will be slightly different when substituting both oils in some recipes. Sesame oil’s smoke point is only 20°F less than olive oil’s smoke point, so one or the other can be used in most cooking methods.

Olive oil substitutes for high temperature cooking include the following:

Sesame oil substitutes for high temperature cooking include the following:

The following are the smoke points for each one:

Avocado oil has the best smoke point. You may want to find out why avocado oil should be used in my article, 11 Reasons Why You Should Use Avocado Oil for Cooking.

Or for a complete list of the smoke point of all oils, it’s included in my article, A Guide For Frying With Avocado Oil. 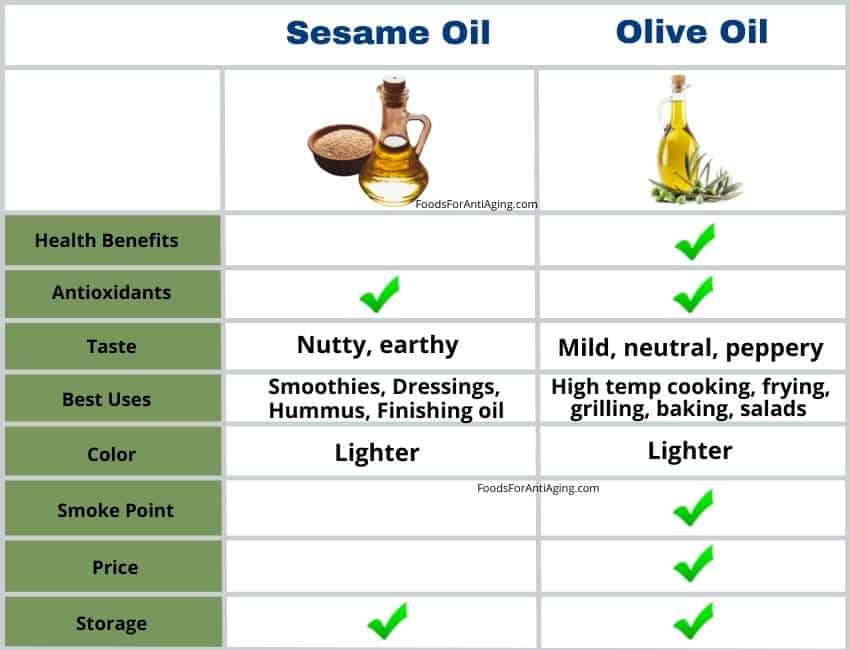 Choosing which oil may depend on your particular goal. Therefore, in this section I examine the most common goals and determine which oil is the better choice for each one.

If you’re looking to lose some extra pounds from the mid-section, the number of calories might matter to you.

Even though both are considered healthy additions to your diet, at 119 calories per tablespoon the calories can add up pretty fast. It’s easy to add multiple tablespoons into a salad. Always be aware of the amount and try not to overdo it.

The goal of most low-carb diets is to consume few carbohydrates and add more fat and protein. The numbers can be so limited every carbohydrate can make a difference.

Therefore, let’s examine which one has fewer carbohydrates or more fat.

If you’re trying to gain lean muscle mass, the amount of protein and carbohydrates may make a difference. Let’s take a look at both and determine which is better for bodybuilding.

Sesame oil and olive oil are similar for bodybuilding because neither oil contains protein or carbohydrates. Both oils contain healthy fats and are a good addition to any bodybuilding diet. When bulking up, the calories from both may prove beneficial.

The prices for groceries keep increasing. For this reason, I’m sure the prices of food matters to most people. Therefore, let’s examine the prices of each one.

Find out how vegetable oil compares to olive oil in my article, Olive Oil vs Vegetable Oil: Which is Better? Let’s Compare.

Good quality food can be costly, therefore, the longevity you get out of it is important. Let’s examine how each one should be stored.

They both can be stored the same.

Store sesame oil or olive oil in a cool, dark location away from light. It’s best to either one in a tinted glass container. Both oils should be kept at a temperature between 55-60℉, although they can be refrigerated or frozen if needed.

Both of them should be stored in the refrigerator if the room temperature rises above 70℉. Leaving either one in warmer temperatures affects shelf life and lessens the quality of the oil.

Unrefined oil or extra virgin can go bad quicker than refined oils. For this reason many people store them in the refrigerator regardless of the room temperature.

Due to heat-creating appliances and heated ovens, kitchens tend to be a bit warmer than most other rooms of the house. Therefore, be sure to monitor your food and the temperature of the room.

There are many ways both oils are beneficial for the heart including the following:

The administration of sesame oil contributed to protection against heart attacks due to its antioxidant properties 5.

Research has shown sesame oil may help prevent heart disease and slow the development of plaque in the arteries 7.

Olive oil has been shown to help improve the lining of blood vessels. A study published in 2015 showed blood vessels opened up and increased blood flow in people who included it in their diet 8.

Olive oil is associated with decreases in inflammation which is a main component of heart disease. One of its antioxidants, oleocanthal, is an anti-inflammatory that also reduces pain 9.

Find out how olive oil compared to sunflower oil in my article, Sunflower Oil vs Olive Oil: Which is Better? Let’s Compare.

The cancer rates in Mediterranean countries is lower than other places.

Antioxidants are believed to contribute to the killing of cancer cells. In a 2015 study, oleocanthal, a phenolic compound present in both of them, helped kill cancer cells in less than one hour 13.

After 4.8 years 35 of the women developed breast cancer. The lowest rate of breast cancer was seen in the women who supplemented with the olive oil 14.

Oleic acid which both are rich in, has been associated with helping to reduce the risk of cancers.

Many studies have shown how sesame oil has been linked to improvements in arthritis. In one such study, it was given to rats who experienced reduced joint pain and arthritic symptoms 15.

Several studies conducted on humans have shown the Mediterranean diet may be associated with a reduced risk of cognitive problems and dementia 17.

Research has shown unsaturated fats, like the fats in sesame oil, may be beneficial reducing the risk of dementia and heart disease 18.

You may want to check out my comparison between olive oil and butter in my article, Butter vs Olive Oil: Which is Better? A Complete Comparison.

Can I Replace Olive Oil With Coconut Oil?

How to Freeze Coconut Oil