Cinnamon is one of the most used spices in many cuisines all around the world. It can be easily incorporated into an extensive range of dishes. This explains why it can be found in pretty much every kitchen, regardless of the skill level of the chef. Chances are at one point you bought too much of it making you wonder, how to store cinnamon?

Cinnamon should be stored in a cool, dry place away from the sunlight. The best storage container is airtight which helps preserve the cinnamon’s flavor and aroma. A sealed container will prevent moisture in the cinnamon.

This blog post will go into complete detail so you can accomplish the storage the best way possible. The kind of container and storage place are crucial for keeping the best cinnamon possible. In addition, I’ll inform you how to tell if your cinnamon has gone bad. Keep reading for all the tips and tricks which will make you a cinnamon pro!

Smoothie Tip: Cinnamon in a smoothie? Yes, I always add 1 teaspoon for added nutritional benefits. In addition, adding frozen fruit, instead of ice, enhances the flavor and nutrient content. The secret to an easy smoothie is having a blender powerful enough to handle the frozen workload.

Disclaimer: Some links in this post are affiliate links. This means if you click them and make a purchase, I’ll receive a small commission at no extra cost to you.

How To Store Cinnamon?

To ensure the best quality for your cinnamon, it has to be stored properly. If not, the taste will be less intense and in the end, you may be unable to achieve the goal you had in mind. Depending on whether you prefer ground up cinnamon or quill cinnamon, you’ll want to take different approaches when storing it to ensure freshness.

Ground up cinnamon is more vulnerable to outside factors, so you will need to be taking more care of it. Like with other ground up spices, make sure to store it in a dark and cold place. Cinnamon needs to be stored where it can be unaffected by sunlight or other heat sources.

The best place would be pantries or the back of your kitchen cupboard. Make sure it is not above any appliance that may expose it to heat, like stoves or ovens. Another important thing is to place it in a resealable container.

A similar approach should be taken when dealing with cinnamon quills 1. However, due to their form the quills are more resistant to the impact of outside sources. Do not grind it up once you get them, but rather keep them in the quill form until needed for cooking.

Seal it in a zip lock bag, jar or any other way that will ensure minimal contact with fresh air. Just like with ground cinnamon, make sure the container is not clear as this will minimize the light exposure.

Should Cinnamon Be Refrigerated?

The best way to approach buying spices is by figuring out how much you will need for your recipe and trying to buy the closest possible amount. Typically, that would mean the smallest container on the supermarket shelf. If you have to buy more, it’s better to buy whole spices.

If you absolutely can not avoid buying bigger amounts, you can store it in the fridge or the freezer 2. However, this is better suitable for whole cinnamon in larger amounts. This is so because the constant usage of the smaller stored amounts will lock in the moisture.

This way your cinnamon will be able to last up to a year or more in the freezer. However, once you take the cinnamon out of the freezer, don’t put it back inside. This will increase the effects of the outside factors and make the cinnamon lose its flavor quicker.

If freezing whole sticks, place them in an airtight plastic freezer bag that won’t allow the moisture inside. For the most effectiveness, using a vacuum sealer is the best way to remove all the air. Amazon has a wide variety of affordable ones which you can check out right here, vacuum sealers.

Technically, cinnamon does go bad if stored long enough. Every pack of cinnamon you purchase will have a best used by date somewhere on it. However, unlike other food products this date does not indicate a time after which cinnamon will be unsafe for consumption. Typically, I recommend discarding it by the best used date.

Even after this date passes, your cinnamon will still be safe for consumption, but the taste and the smell will slowly decrease in its intensity. This means you’ll still get the desired effect, but depending on how much time has passed since the date, you will have to use more than usual. Typically, ground cinnamon will keep for about six months.

If you don’t want to taste the cinnamon go by the smell and color. If the smell has lost its potency, no longer strong or if the color has faded in intensity, you should replace it.

Another way spice may go bad is when they get contaminated with other food. If particles of other food get inside the cinnamon container and go bad, it will contaminate the cinnamon as well and make it unsafe for use. Since the other food can go bad much easier than the spices, the chances of this is happening is much higher.

The shelf life of your cinnamon will depend on the type you get and the way it was produced. Ground up cinnamon has a tendency to lose its prominent taste and smell quicker due to the fact that the powder form will be easily affected by outside factors. The ground up cinnamon is better for people who use it regularly.

If you are looking for something to last a longer time, you should consider getting cinnamon quills or sticks. The way the quills are produced cause the flavor to be locked on the inside of it and hence, last longer. Every time you need to use cinnamon, you can grind some of it into your dish and have the same strong flavor every time.

How To Tell If Cinnamon Is Bad?

Although the cinnamon, like many other spices, doesn’t go bad, there are few things that can make it unusable. There are a few things you should look out for, mostly water or any other kind of moisture getting inside the cinnamon container.

This will most likely produce big connected clumps of cinnamon and encourage wet spots. This may cause mold or other organic growth. If this happens to your cinnamon, you could throw it away.

Another thing to look out for is any change in color and smell. If you want to keep track of your spices and expect high quality, you can try the following tips. Set a date once a year and replace all the spices you have on that date, for example after New Years. If you want to be more precise in this process, you could label your cinnamon.

Once you buy your cinnamon transfer it to the container you prepared for it. After that make a small label with the date you purchased the cinnamon and the date you plan to throw it out. The only thing you need to do after that is to check your cinnamon every now and then to look for any signs of contamination. Once the date on your label starts approaching, replace it

Can You Store Cinnamon in the Fridge?

How to Keep Garlic Powder From Getting Hard 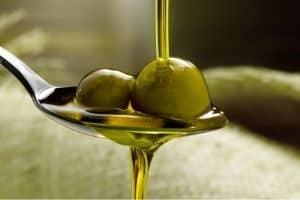 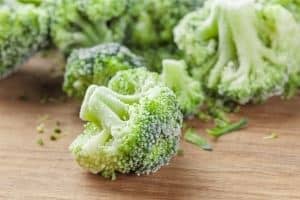 Have you ever accidentally bought just a little too much broccoli from the supermarket? Never know what to do with them or how to save them up for your next meal? The solution to this is to freeze your broccoli. When raw or cooked, fresh broccoli has a shelf life of 3 to 5 days,… 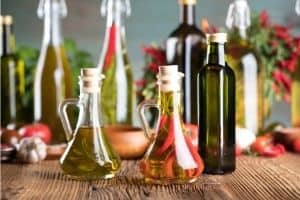 Olive oil has been recognized as a healthy oil alternative for use in the kitchen for centuries. More and more people are using olive oil as they learn of its health benefits. If you’re new to the wonders of using olive oil, there are a few things you should know about storage. One of them… 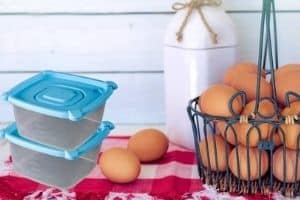 Eggs are highly versatile ingredients that can be used to prepare just about anything. And since these power ingredients work best when fresh, it’s best to keep them well preserved, preferably inside the fridge. You probably have these containers already and are asking the question, can you store eggs in Tupperware? You can store eggs… 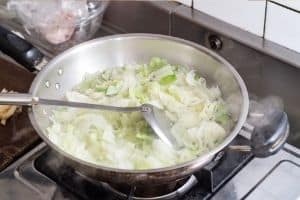 Whether you’ve accidentally cooked too much cabbage or you’ve decided to cook some in advance, freezing cooked cabbage is an easy, straightforward process. Therefore, how do you freeze cabbage you’ve already cooked? How to freeze cooked cabbage: Allow the cabbage to completely cool after cooking. Cut the cabbage to your liking. Wrap the cabbage in…

Typically, after opening a package of tofu, you may not use the whole package. Or after cooking some tofu you may have leftovers and want to save it for another day. These are just a few examples of wanting to save some for a future meal. Therefore, how do you preserve tofu? Cooked tofu can…