Informing people about healthy foods like almond or skim milk is part of my Health Coaching job. Many of my clients want to know if one milk is better than the other. Therefore, let’s answer, which is better, almond milk or skim milk?

This article will include a side-by-side nutrient comparison of both milks. In addition, I’ll examine their tastes, textures, prices, glycemic indexes, health benefits and whether one can substitute for the other.

Both milks are healthy choices but they’re not the same. Therefore, let’s examine how they’re different.

Almond milk is a plant-based milk that gained popularity as a dairy milk alternative a couple of decades ago. This is largely due to the flavor profile compared to previous dairy alternatives 1. How is almond milk made?

Almond milk is manufactured by crushing almonds into a pulpy mixture. Water is added to the mixture and then it is strained. The remaining liquid is packaged and sold as almond milk.

How is skim milk made?

Skim milk is made from full-fat dairy milk by removing the fat with a high-speed separator resembling a centrifuge 2. This is a mechanical process and no chemicals are involved.

Although the fat in skim milk has been removed, the remaining nutrients are the same type as whole milk.

The following is a nutrient comparison between store bought unsweetened almond milk and skim milk:

Both are nutrient dense. Therefore, at first glance it may be difficult to determine which is healthier, almond milk or skim milk.

Almond milk is healthier due to its fewer calories, carbohydrates and sugar. Almond milk provides a greater percentage of iron, copper and calcium. Almond milk is lactose free and has a lower glycemic index.

Skim milk is healthy also and contains a higher percentage of protein, B vitamins, magnesium and potassium.

Which to Choose? Almond Milk or Skim Milk

Choosing between the two may depend on your particular goals. Let’s examine some of the most popular goals people have.

The number of calories per serving matters greatly if your goal is to shed some extra pounds. Even the smallest differences can add up pretty quickly. Let’s examine which is better for weight loss, almond milk or skim milk.

Almond milk is better for weight loss because it has 39 calories and skim milk has 91 calories per 1 cup. Almond milk provides 52 fewer calories than skim milk. This equals 134% less calories while drinking almond milk per 1 cup serving.

If you’re on one of these diets or considering it, the number of carbohydrates may make a huge difference in your decision. Every gram of carbohydrates is important when on a low carb diet.

Therefore, let’s examine which one has fewer carbs, almond or skim milk.

If gaining lean muscle mass on your body is the goal then the amount of protein and carbohydrates may matter to you.

Therefore, let’s examine which is better for bodybuilding, almond milk or skim milk.

Skim milk is better for bodybuilding than almond milk due to its higher percentage of protein and carbohydrates. The extra carbs can help fuel exercise performance and the added protein may help rebuild damaged muscle.

For people who have celiac disease or wish to follow a gluten free diet the goal is clear cut, avoid gluten. Therefore, let’s answer which one is gluten free.

Almond milk and skim milk are both gluten free and good for gluten free diets. Some flavored milks may have additives that are not gluten free so always check the label prior to consuming them.

If the amount of sugar in your meals is important, you’ll want to know which of the two milks has less sugar.

Almond milk is better than skim for vegans or vegetarians because it is not considered dairy and is not an animal-derived product. Skim milk is cow’s milk that went through a skimming process to remove the fat.

Almond milk is better than skim milk for lactose intolerance because it is lactose free while skim milk contains lactose. Therefore, if you must decrease the amount of dairy, the plant based almond milk is the better choice. 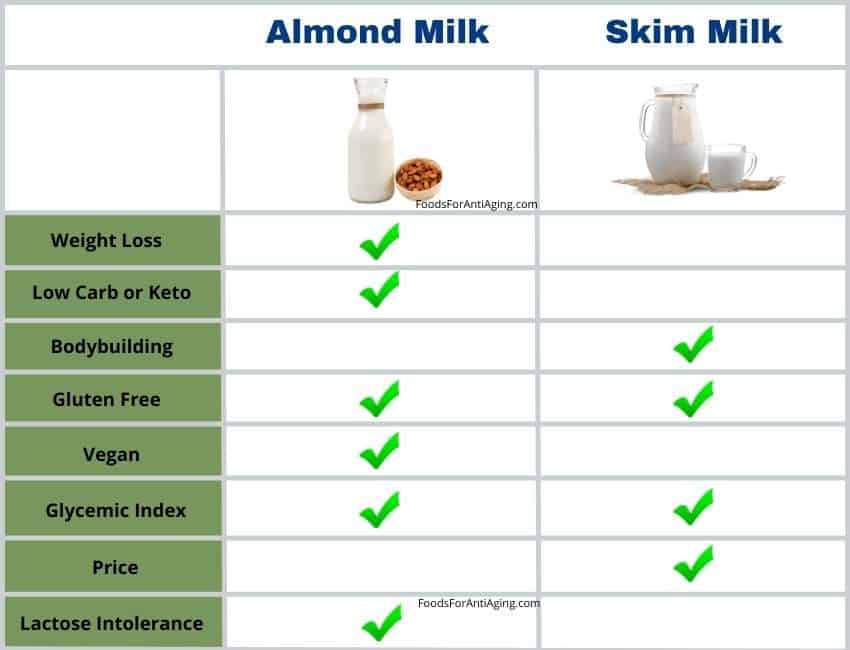 Sometimes all the issues and goals listed above don’t matter, and the taste and texture may make the difference when choosing between the two. If someone doesn’t like how a food tastes, they will probably leave it on the shelf.

Therefore, let’s examine how the taste and texture of almond milk and skim milk compare.

I wanted to get the opinion of real people like you by conducting some original research. So I reached out to some of my clients, readers and members of food groups and asked, what tastes better, almond milk or skim milk?

In the battle of taste, almond milk tastes better and was the winner in the poll by a landslide.

Sometimes people want to substitute one food for the other due to taste, availability or for health reasons. This makes people wonder if they can substitute almond milk for skim milk.

Almond milk and skim milk can substitute for each other because they have a similar consistency although the flavor will differ slightly. When substituting almond or skim milk for each other, use a 1:1 ratio and the cooking time should be similar.

Skim milk or almond milk can be used for the following:

Almond milk is better for coffee than skim milk due to its slightly creamier texture. It’s better to allow the almond milk to cool down a little before adding it to the coffee for less curdling. Almond milk can also be frothed into a nice foam.

The Prices of Almond Milk and Skim Milk

The price of foods purchased every week is important to most people, especially with inflation the way it is. Let’s take a close look at how much almond milk and skim milk costs.

To conduct my own research, I visited some local supermarkets and compared the prices of almond milk and skim milk. Here are my findings.

First I checked the Walmart supermarket:

I then checked my local Shoprite supermarket:

The Glycemic Index (GI) is a scale measuring how fast a particular food raises the blood sugar in the blood 6. Blood sugar spikes can lead to health complications with the heart, nerves, kidneys and eyes 7.

Let’s examine which milk, almond or skim, has a higher glycemic index.

In addition, calcium is important for the heart and blood pressure. Harvard Health reports calcium helps maintain blood pressure by helping in the controlling of the relaxing and tightening of blood vessels 8.

Iron is a necessary part of any healthy diet 9 and may help with the following:

Many people supplement with magnesium in the evening because it helps calm the whole body including blood vessels.

According to Harvard Health, a number of studies have shown a connection between low potassium levels and high blood pressure 11. The more potassium, the more sodium your body will lose.

B vitamins help support the following 12:

Phosphorus has been shown in scientific studies to help with the following:

Find out how almond milk compared to cashew milk in my article, Cashew Milk vs Almond Milk: Which is Better? Let’s Compare.

Can Almond Milk be Frozen? Find Out Here

Will Almond Milk Break My Fast?

link to Butter vs Olive Oil: Which is Better? A Complete Comparison

For a long time people have been debating over the use of butter or olive oil. It's a topic which many of my clients bring up during my health coaching sessions. The most common thing people want to...

Many oils, like sunflower oil, are compared to olive oil for various reasons. During my health coaching sessions, clients often ask, is sunflower oil better than olive oil? Olive oil is better...