This article will compare their tastes, textures, costs and whether one can substitute for the other. In addition, I’ll do a side-by-side comparison of their species, habitats and appearance.

Disclaimer: The above link and others in this article are affiliate links which means I may earn a small commission at no extra cost to you. As an Amazon associate I earn from qualifying purchases.

There are times different species of the same type of fish are difficult to tell apart. This can cause an issue when shopping in the market, fishing or just out of curiosity. Many times this is true with catfish.

Let’s answer, how can you tell the difference between a bullhead catfish and a channel catfish?

Addition ways to tell the difference between a bullhead catfish and a channel catfish:

There are three common bullheads in The United States and North America:

Therefore, since the term bullhead is used to describe different species of fish, I’ll be comparing the channel catfish to the three more common bullheads listed above.

Black Bullhead catfish are from:

Brown Bullhead catfish are from:

Yellow Bullhead catfish are from:

Channel catfish are from:

Channel catfish and bullheads are from the same family but different genus and species. 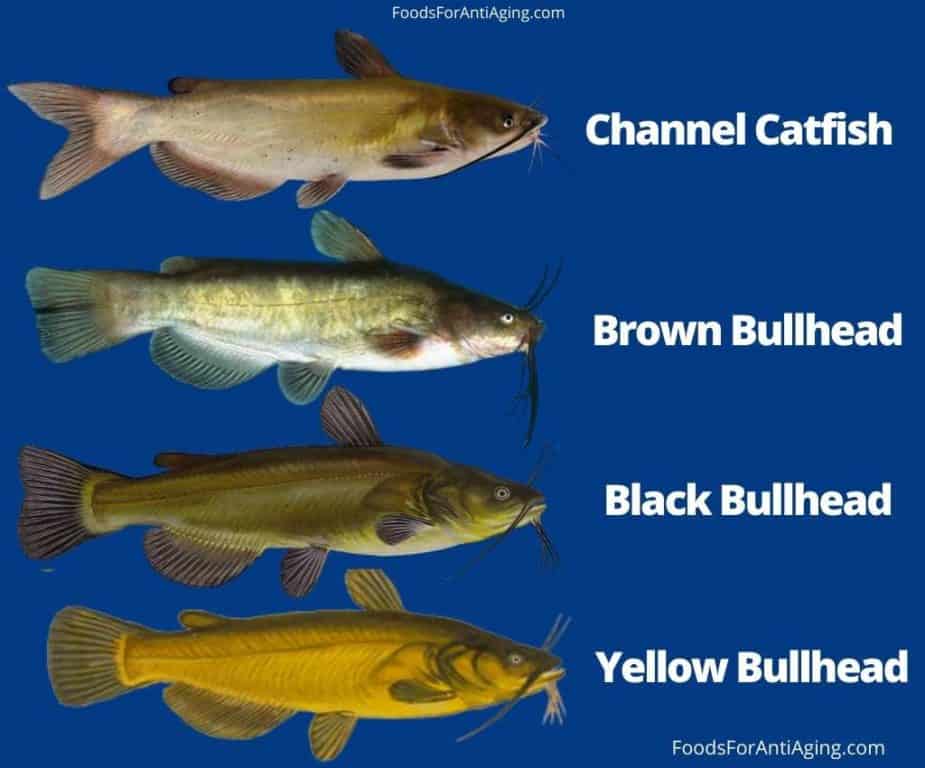 Channel and bullhead catfish are located in many of the same areas and types of water. Bullheads are able to tolerate water with low oxygen.

Catfish and other seafood are renowned for being a part of many diets like keto or heart healthy.

Two reasons people choose to eat a certain catfish are their texture and taste. After all, who wants to add a nice fried fillet to their plate, unless they enjoy the taste? When comparing the two catfish, what tastes better bullhead or channel catfish?

Bullhead catfish and channel catfish have a similar mild to medium taste. Both catfish may taste slightly muddy depending on the type of water it came from. The textures of bullhead and channel catfish are firm and less flakey than most white flesh fish. A farm raised catfish will taste milder.

What does bullhead catfish taste like? Bullhead catfish have a mild flavor if farm raised or from clear water. If wild caught, the flavor may be muddy. The texture is moist and meaty if cooked properly.

I polled people from food groups I participate in and readers. The following are the results from the poll of 28 people. I asked which fish tastes better, bullhead catfish or channel catfish?

Find out how blue catfish compared to flathead in my article, Flathead Catfish vs Blue Catfish – What’s The Difference?

It’s not always possible to locate the type of fish called for in a recipe. In addition, maybe you only catch one type of catfish or only have one in the refrigerator. If you have some bullhead catfish, you may ask, can I substitute bullhead for channel catfish?

Bullhead catfish substitutes include the following:

Channel catfish substitutes include the following:

How To Cook Bullhead Catfish

If the bullhead catfish is muddy, try this to improve the taste.

People love coating the catfish with yellow cornmeal before frying or baking.

How To Cook Channel Catfish

Some people may find channel catfish a little muddy depending where they were caught or the temperature. Therefore, the preparation is important.

Many people soak the fish in milk or icy water, rinse the fillets and soak the fish again. Keep repeating this process until the water and the flesh of the fish become clearer.

Find out how channel catfish compared to blue catfish in my article, Channel Catfish vs Blue Catfish: What’s The Difference?

The FDA and EPA have issued suggestions and warnings regarding mercury levels in fish and how often they should be consumed 20. This is especially important for:

Knowing how important mercury levels are, everyone should know how much mercury each fish contains. Therefore, does bullhead catfish or channel catfish have more mercury?

Bullhead catfish and channel catfish have similar levels of mercury and are listed on the FDA’s best choices of fish regarding mercury levels.

If you’re pregnant, breast feeding or has a young child, Always check with a physician prior to eating new foods or changing your dietary habits.

Mercury warnings can change over time or affect only a particular area or state. Please check with your local EPA and FDA for the current recommendations 21.

The prices for most fish fillets and fresh fish will vary depending on how they’re caught and where they’re sold. Always check the label to see if its farm raised or wild caught which affects the price. Therefore, which fish costs more, bullhead catfish or channel catfish?

I conducted a search for the most popular websites selling fish online. Many of the businesses sold catfish but didn’t specify what type of catfish. The following are the prices I was able to find in my search.

I checked online at Amazon and found the following:

Check out Amazon’s current prices and selection of catfish or any other seafood, Fresh Seafood.

I checked Cast Away Lakes online:

Find out how channel catfish compared to flathead catfish in my article, Channel Catfish vs Flathead Catfish: What’s The Difference?

The table below shows the nutrients contained in 4 ounces of channel catfish.

I was unable to verify the amount of each nutrient contained in bullhead catfish. For this reason, I didn’t want to include bullhead’s nutrient numbers. Bullhead does provide the same nutrients as channel catfish listed above.

Bullhead and channel catfish provide similar amounts of omega-3 fatty acids, B vitamins, protein and minerals. Keep reading the next section to find out how these nutrients benefit health.

Find out how bullhead compared to flathead catfish in my article, Bullhead Catfish vs Flathead Catfish: The Differences.

The Health Benefits of Bullhead Catfish and Channel Catfish

Channel catfish provides 0.53 grams per four ounces. Omega-3 fatty acids are healthy in many ways, especially for the heart. They have been determined in scientific studies to help with the following:

For this reason, omega-3s are sold as a supplement. They are extracted from the flesh of fatty fish like herring, sardines, salmon, tuna, anchovies and cod livers. The best way to obtain omega-3 is consuming fresh fish, low in mercury twice per week.

Two of the fatty acids, EPA and DHA, have been shown in studies to lower blood pressure and improve the function of blood vessels 26.

Other studies have shown them to reduce joint stiffness and pain in people with arthritis. Omega-3 fatty acids have also increased the effectiveness of anti-inflammatory drugs.

One reason many people supplement with magnesium in the evening is because it helps calm the whole body including blood vessels.

In the heart and muscles, magnesium competes with calcium to help the muscles relax after contracting. When the body is low in magnesium, calcium can over stimulate the heart muscle’s cells causing a rapid or irregular heartbeat 28.

Selenium is a nutrient provided by bullhead and channel catfish which doesn’t receive much attention in articles about health. Many scientific studies 29 show selenium may help to protect the following:

The B vitamins provided by bullhead and channel catfish include the following:

The calcium provided by bullhead and channel catfish is important for the heart and blood pressure. Harvard Health reports calcium helps maintain blood pressure by helping in the controlling of the relaxing and tightening of blood vessels 30.

The phosphorus contained in bullhead and channel catfish has been shown in scientific studies to help with the following:

link to Bulgur vs Quinoa: Which is Better? A Complete Comparison

Bulgur and quinoa are healthy options increasing in popularity. For this reason many people wonder if one is better. Let's answer, is bulgur better than quinoa? Quinoa is better than bulgur due to...

Continue Reading
link to Millet vs Quinoa: Which is Better? A Complete Comparison

Millet and quinoa are both healthy and increasing in popularity. For this reason many people wonder if one is better than the other. Therefore, what is better millet or quinoa? Quinoa is better...