This article will do a side-by-side comparison of their nutrients. In addition, I’ll examine their textures, tastes, cooking methods, whether one can substitute for the other and their costs.

You may have heard certain potatoes are similar in nutrients. This may be true to a certain extent. There are some differences and similarities. So, let’s take a look at the nutrients contained in each potato.

The following table is a side-by-side comparison of the nutrients contained in red potatoes and Russet potatoes:

At first glance it may be difficult to determine which potato contains a higher percentage of nutrients. Both of them provide a good number of vitamins and minerals. Let’s answer, are red potatoes healthier than russet potatoes?

Russet potatoes are no slouch and are very healthy also. They contain more B6, iron and calcium than red potatoes. Both potatoes contain a similar number of thiamin, riboflavin, B5, magnesium and zinc.

The extra vitamin C, fiber and fewer carbs are what gives red potatoes the edge although you can’t go wrong eating either one.

If you want to try a low-carb diet, you may want to look for alternatives to potatoes altogether.

Due to a different skin color and size, it’s easy to think they don’t taste the same. Let’s examine the taste and texture of a red potato and Russet potato.

What does a red potato taste like? Red potatoes have a mild, slightly buttery and earthy flavor. Red potatoes are less starchy, waxy and dense.

What does Russet potatoes taste like? Russet potatoes have a neutral, mild flavor which is unsweet. There’s a starchy undertone and the flesh is creamy. If you eat the skin, russet’s skin is thicker than other potatoes.

Can You Substitute Russet Potatoes for Red Potatoes?

Red potatoes are best for the following:

Use Russet potatoes for the following: 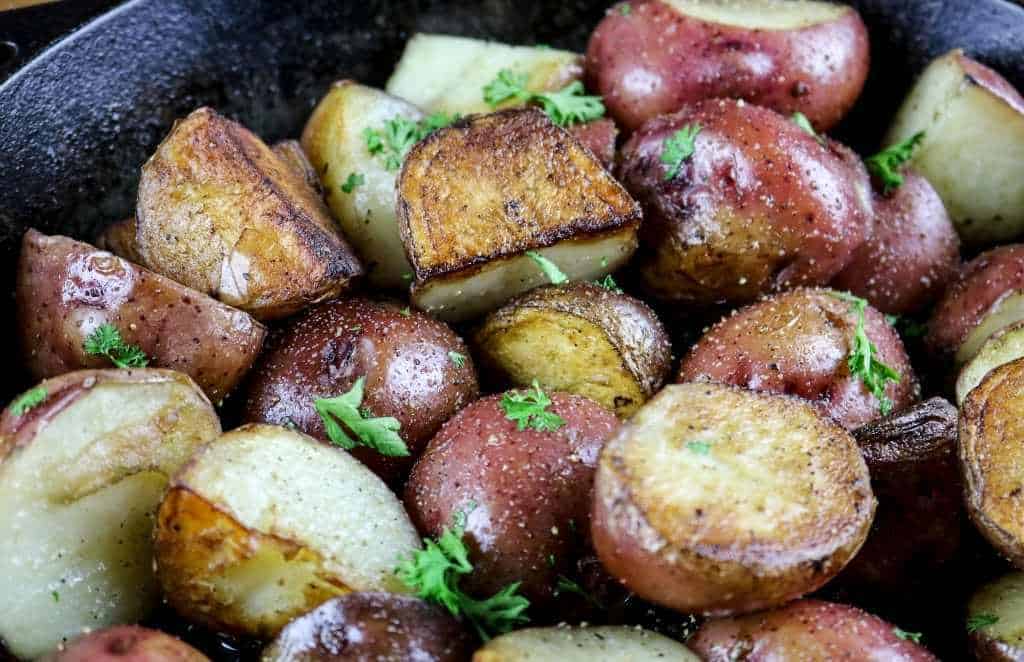 There are a few things you should consider before substituting these potatoes with each other.

With the rising prices of everything, the cost of potatoes may be a consideration. The price may sway your decision about which potato to use. Therefore, which costs more, red potatoes or russet potatoes?

Red potatoes and Russet potatoes have a similar price. Both potatoes average cost is $0.99 per pound for loose, large potatoes.

I checked Shoprite supermarket for the prices of red and russet potatoes:

I also checked Walmart for red potatoes and Russet prices:

Red potatoes and Russets are easy to find on Amazon. Check out the current prices, potatoes.

How to Store Red Potatoes and Russet Potatoes

How to properly store potatoes may make a difference when choosing one over the other. In addition, you’ll want either one to last as long as possible. Therefore, how do you store red potatoes or Russet potatoes?

Store red potatoes or Russet potatoes in a dark place away from heat. Both potatoes should be kept out of the refrigerator. A humid basement or root cellar is the best area. They should be kept in a burlap bag or ventilated container and stored between 40°F and 60°F.

Storing potatoes in a refrigerator can change the cell structure, make the center of the potato hard and diminish the flavor. If you don’t have a cool basement, be sure to store them in a ventilated place, away from heat and light.

Don’t wash the potatoes before storing them. This is especially tempting with Russet potatoes picked out of a supermarket bin. The moisture will promote the growth of bacteria and fungus 5.

Find out if Idaho and Russet potatoes are really the same in my article, Idaho vs Russet Potatoes – Are They The Same? Let’s Compare.

If you’re on a low-carb diet, most potatoes are off limits because they are almost pure starch. While most people on this type of diet swear by cauliflower as a perfect substitute for potatoes, it doesn’t have the same consistency and can be a disappointing experience.

Here are some better non potato alternatives for Russet and red potatoes:

Many of these can be used as French fries or in dishes like Au gratin or scalloped. If you want something to replace mashed potatoes, you might try parsnips, which are related to carrots.

Here are some other potatoes which can be red potato alternatives:

Here are some other potatoes which can be Russet potato alternatives:

If you’re interested about how sweet potatoes held up against pumpkin for health and nutrition, check out my article, Pumpkin vs Sweet Potato: A Complete Comparison.

The Glycemic Index (GI) is a scale measuring how fast a particular food raises the blood sugar in the blood 6. Blood sugar spikes can lead to health complications with the kidneys, nerves, heart and eyes 7.

If you’re wondering which potato has a higher GI, let’s answer, does red potatoes or Russet potatoes have a higher GI?

Not every potato has an equal GI. Russet and other white/red potatoes all have different GI scores. In addition to how a potato is cooked, the heat of the potato when eaten affects the GI.

Red potatoes contain 8.6 mg of vitamin C per 100 grams and Russets 5.7 mg. Vitamin C acts as an antioxidant and helps with the following:

According to Harvard Health, a number of studies have shown a connection between low potassium levels and high blood pressure 10. The more potassium, the more sodium your body will lose.

Consuming too much sodium or not enough potassium throws off the delicate balance the kidneys need to remove the excess water 11.

Fiber for Gut Health and Digestion

The B vitamins provided by red potatoes and Russet potatoes include the following:

Find out how taro compared to potatoes in my article, Taro vs. Potato – A Complete Comparison.

link to Bulgur vs Quinoa: Which is Better? A Complete Comparison

Bulgur and quinoa are healthy options increasing in popularity. For this reason many people wonder if one is better. Let's answer, is bulgur better than quinoa? Quinoa is better than bulgur due to...

Continue Reading
link to Millet vs Quinoa: Which is Better? A Complete Comparison

Millet and quinoa are both healthy and increasing in popularity. For this reason many people wonder if one is better than the other. Therefore, what is better millet or quinoa? Quinoa is better...