Informing people about healthy foods like spinach and Swiss chard is part of my Health Coaching job. Many of my clients want to know if one is superior to the other. Let’s answer which is better, spinach or Swiss chard?

Spinach is better than Swiss chard due to its higher percentage of protein, fiber, minerals and vitamins. Spinach provides 50% more iron, 1,280% more folate, 47% more potassium, 53% more Vitamin A and 94% more calcium. Swiss chard is more difficult to find in stores and costs more per ounce.

This article will examine their tastes, textures, prices, glycemic indexes, health benefits and whether one can substitute for the other. In addition, I’ll include a side-by-side nutrient comparison.

Swiss chard and spinach look similar. This makes some people wonder if they are related. Let’s take a closer look at the two.

Spinach and Swiss chard are both green leafy vegetables but they are from different cultivar groups and species. The Swiss chard species is Beta vulgaris and the spinach species is Spinacia oleracea. Swiss chard leaves may be green or red coloring and the stems red, yellow or white while spinach is all green.

The following table compares the nutrients contained in raw spinach and Swiss chard per 100 grams.

Both vegetables are nutrient dense. At first glance it may be difficult to determine which is healthier, spinach or Swiss chard.

Swiss chard is healthy also and provides more of the following:

Find out how each one of these nutrients benefit health in the lower section of this article.

Which to Choose? Spinach or Swiss Chard

Choosing one food or the other may depend on your particular goals. This section will examine the four most popular goals and determine which of the two foods is better for them.

This goal is an easy one to determine. For people who have celiac disease, whether one food contains gluten will automatically make the decision which to choose.

Spinach and Swiss chard are gluten free. Therefore, both foods are good options for a gluten free diet.

If you’re considering one of these diets or currently consuming low-carb foods, the number of carbs may make a huge difference in your choice. Therefore, let’s examine if spinach or Swiss chard has more carbohydrates.

The difference isn’t large and choosing one over the other may not matter much. Although when limiting the total daily amount, every gram can make a difference.

Spinach has 23 calories, and Swiss chard has 19 calories per 100 grams. Swiss chard provides 4 fewer calories than spinach. While this number may not seem like much, it equals 21% less calories making Swiss chard better for weight loss.

The difference is minimal and choosing one over the other may not make much of a difference. Although when counting calories every little bit may help as the total is calculated for the day.

If gaining lean muscle mass is your goal then the amount of protein and carbohydrates may matter to you.

Healthy carbohydrates help to increase performance and fuel energy when exercising or lifting weights. It’s why marathon runners consume many carbs the day and night before the big race.

Any extra protein helps to build and repair muscle after putting them through a good workout. Therefore, let’s take a closer look at which is better for bodybuilding, spinach or Swiss chard.

In addition, spinach provides a few more calories which may help when trying to bulk up. The carbohydrate number between the two is similar. 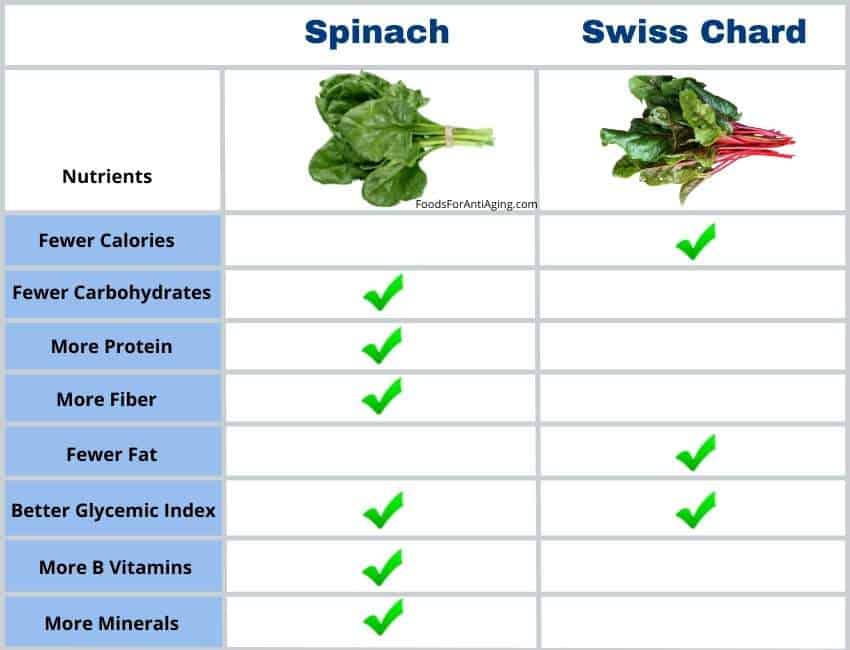 Let’s face it, if someone doesn’t like the way a food tastes, they will probably leave it on the store shelf. Therefore, let’s examine how the taste and texture of spinach and Swiss chard compare.

Swiss chard has a slightly bitter taste when raw compared to the slightly milder spinach. Cooked Swiss chard loses the bitterness and tastes milder and sweeter, similar to spinach. The spinach and Swiss chard leaves have a similar texture when raw and both wilt when cooked.

The stem of the Swiss chard leaf is crunchy with a sweet flavor.

I wanted to get the opinion of real people like you by conducting some original research. So I reached out to some of my clients, readers and members of food groups and asked, what tastes better, spinach or Swiss chard?

In the battle of taste, spinach had a slight win over Swiss chard.

Sometimes people want to substitute one for the other due to taste, price or availability. This makes some people wonder if they can substitute Swiss chard for spinach.

Other substitutions for Swiss chard or spinach include the following:

Swiss chard or spinach can be used in the following preparations:

The Prices of Spinach and Swiss Chard

The price of foods purchased every week is important to most people, especially with inflation the way it is. Let’s take a close look at how much spinach and Swiss chard cost.

To conduct my own research, I visited some local supermarkets and compared the prices of Swiss chard and spinach. Here are my findings.

I then checked my local Shoprite supermarket:

I then checked FreshDirect online:

The Glycemic Indexes of Spinach and Swiss Chard

The Glycemic Index (GI) is a scale measuring how fast a particular food raises the blood sugar in the blood 3. Blood sugar spikes can lead to health complications with the heart, nerves, kidneys and eyes 4.

Let’s examine which food has a higher glycemic index.

Swiss chard and spinach have low glycemic indexes and are considered low GI foods. Either food is a good choice avoiding many blood sugar spikes.

Compare the benefits of baby spinach and mature spinach in my article, Baby Spinach vs Spinach: Which is Better? A Comparison.

This section will examine the health benefits of the nutrients provided by both foods. Each section includes the benefits of each nutrient and a breakdown of the numbers and percentages provided by each vegetable.

Vitamin C acts as an antioxidant and helps with the following:

Vitamin K comes in two forms. Phylloquinone is the one found in spinach and Swiss chard.

Vitamin K helps to make various proteins needed to help with the following:

Vitamin K, through the production of proteins, help to prevent hardening or calcification of the arteries 5.

Many people supplement with magnesium in the evening because it helps calm the whole body including blood vessels.

Find out if kale or spinach had more nutrients in my article, Kale vs Spinach: Which is Better? A Complete Comparison.

In addition, calcium is important for the heart and blood pressure. Harvard Health reports calcium helps maintain blood pressure by helping in the controlling of the relaxing and tightening of blood vessels 7.

According to Harvard Health, a number of studies have shown a connection between low potassium levels and high blood pressure 8. The more potassium, the more sodium your body will lose.

Iron is a necessary part of any healthy diet 9 and may help with the following:

Spinach provides more of both but Swiss chard provides a good amount also.

Spinach provides 53% more vitamin A than Swiss chard per 100 grams.

Beta-carotene is a compound present in Swiss chard and spinach. The body converts beta-carotene into vitamin A.

According to scientific studies, vitamin A helps the eyes when it comes to dim light vision and dry eyes 10.

Besides eye health, an increased number of vitamin A has been shown to fight and prevent cardiovascular disease, which is the leading cause of death in the United States 11.

In addition, vitamin A is a powerful antioxidant that can help reduce cellular damage by controlling the negative effects of free radicals 12.

Find out if collard greens are better in my article, Collard Greens vs Spinach: Which is Better? A Comparison.

Spinach vs Romaine: Which is Better? An Ultimate Comparison

Spinach vs Broccoli: Which is Better? A Complete Comparison

Frozen Spinach vs Fresh: Which is Better? A Comparison

Raw Spinach vs Cooked Spinach: Which is Better? A Comparison

Arugula vs Spinach: Which is Better? A Complete Comparison

Spinach vs Lettuce: Which is Better? A Complete Comparison

link to Spinach vs Romaine: Which is Better? An Ultimate Comparison

Part of my job as a Certified Health Coach is to inform people about healthy foods like spinach and romaine lettuce. Many of my clients ask me if one is superior to the other. Let's answer which is...

Continue Reading
link to Spinach vs Broccoli: Which is Better? A Complete Comparison

Part of being a Certified Health Coach is to inform people about healthy foods like spinach and broccoli. Many of my clients ask me which one is preferred. Let's answer, which is better, spinach or...