I typically use extra virgin olive oil for almost everything when oil is required. The other night I ran out of olive oil and didn’t feel like running to the store. I checked the fridge and found some coconut oil. It’s funny, because a few months earlier a client of mine asked me, is coconut oil a good replacement for olive oil?

In this article, we’re taking an in-depth look at cooking with coconut oil and olive oil. I’ll let you know when it may be better to use one over the other. In addition, I’ll discuss which one is healthier, and why.

Keto Diet Tip: Extra virgin olive oil a great choice for a low-carb diet. It contains zero carbs and healthy fat. One of the biggest reasons for failing a Keto diet is not having a plan. Simply follow this plan for only 28 days, The 28-Day Keto Challenge and you can Succeed!

A few years back, coconut oil’s popularity began to increase. People started using coconut oil as a replacement for butter and vegetable oil. Some people even shelved their olive oil in favor of coconut oil. Choosing between the two for everyday use, you’ll want to answer the question, is coconut oil healthier than olive oil?

In fact, olive oil is considered to be the most healthy oil you can use. Olive oil, when used in reasonable amounts, is actually good for you. Although coconut oil can be used as a substitute when needed, olive oil is the healthiest option when cooking, baking, or frying foods 1.

Coconut oil has about six times the amount of saturated fat when compared to olive oil. Saturated fat should be limited because it can raise cholesterol numbers, good and bad 2. The increase in bad cholesterol, LDL, has been linked to plaque build-up in the arteries and cardiovascular disease risk 3.

The following table compares the nutrients of coconut oil 4 and olive oil 5.

Manly due to its fatty acids and antioxidants, olive oil has been shown to help improve the following 6: 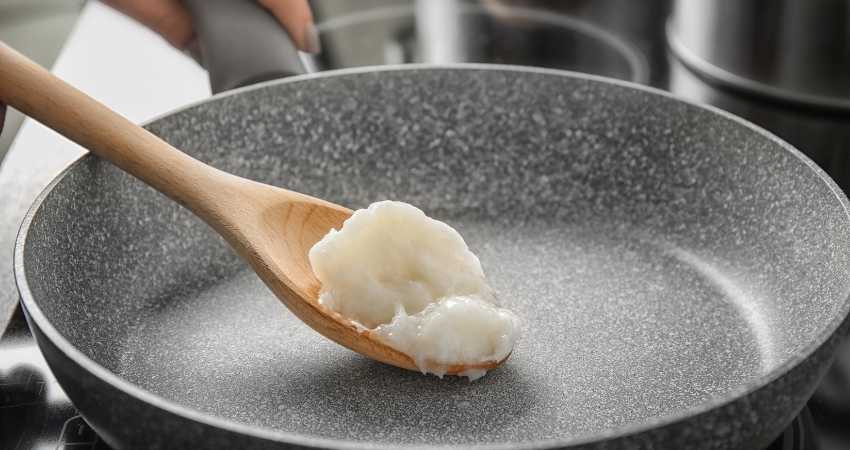 Olive Oil VS Coconut Oil For Cooking: Which Is Better?

Can You Substitute Olive Oil For Coconut Oil In Baking?

It’s not often people bake with olive oil. Typically people use butter and when oil is used, they use vegetable oil. The great thing about baking is it allows you the freedom to be creative. Instead of vegetable oil, you’d be much better using olive oil.

With that being said, you can substitute olive oil with coconut oil for baking. Sometimes using coconut oil instead of olive oil can give you a richer flavor. This is because coconut oil has a higher fat content than olive oil.

Because many baked goods rely on the fat content found in butter, coconut oil is a substitute for baking 7. When substituting butter with coconut oil, use solid coconut oil at room temperature.

Solid coconut oil has a texture similar to butter and can be mixed with flour the same way. To bring out more of the coconut flavor and retain benefits 8, use virgin coconut oil instead of refined. Virgin retains more flavor and odor because it goes through less processing.

Is Coconut Oil Better Than Olive Oil For Frying?

Frying food involves cooking it in very hot oil. Some oil is more stable than others when heated up to high temperatures. Oils with more saturated fat remain more stable for frying.

Since coconut oil is made up of over 90% saturated fat, it will hold up better while being fried than most oils. Therefore, coconut oil can be used as a substitute to olive oil when frying 9.

Olive oil is resistant to heat also and will remain relatively stable for frying. When frying for a long time, some flavor and odor will disappear faster than coconut oil.

When frying, using an oil with a high smoke point is beneficial. Smoke point is the temperature at which the oil begins to smoke 10. The smoke points for cooking oils vary from one oil to the next. The smoking point even varies between virgin and refined coconut oils. The table below shows the different smoking points of oil.

For frying, coconut oil would seem to be the better choice over olive oil. It remains more stable, smokes slightly less and can retain more of its flavor. Although olive oil still makes a decent oil for frying and is the more healthier choice. Except for being in a pinch, I’ll choose the olive oil first.

Can You Use Coconut Oil On Salad?

It’s more popular to dress salads with olive oil and balsamic vinegar. Therefore, you might be wondering, can you use coconut oil on salad?

Coconut oil cannot be used on salad unless it’s mixed with other ingredients or kept at a higher temperature. This is to prevent it from forming into a solid. Higher temperature oil or solid is not good for using as a salad dressing.

There is many recipes on the internet which allows you to mix coconut oil with other ingredients, like olive oil or vinegar. This helps prevent it from becoming solid at room temperatures.

I would recommend using extra virgin olive oil over coconut oil on your salads. It’s healthier and doesn’t have to be mixed with other ingredients or heated up to keep it as a liquid.

Olive oil is used with most ground beef substitutes. Check out the 12 alternative foods in my article, Ground Beef Alternatives: 12 Healthy Substitutes.

How to Freeze Coconut Oil

A Guide For Frying With Avocado Oil

11 Reasons Why You Should Use Avocado Oil for Cooking

These Are The Best Mango Types For Pickling And More

link to Sesame Oil vs Olive Oil: Which is Better? Let's Compare

During my health coaching sessions many people ask about healthy foods including oils. Sesame oil and olive oil come up in conversation frequently because of their benefits. The questions quickly...

Continue Reading
link to Avocado Oil vs Olive Oil: Which is Better? A Comparison

Part of my role as a Certified Health Coach is informing people about healthy foods like oils. Avocado and olive oils are two of the most popular topics that come up in conversation. Let's answer one...