One of my roles as a Certified Health Coach is to inform my clients about cooking oils. Olive oil and canola oil are two of the common oils mentioned. I’m often asked, is canola oil better than olive oil?

This article will describe the differences between the two oils including a side-by-side nutrient comparison and health benefits. In addition, I’ll examine their smoke points, whether one can substitute for the other, prices, tastes and storage.

Canola oil is made by the following method:

All olive oils are held to certain USDA grade standards 1. Extra virgin is certified as having the highest grade standards for excellent flavor, odor and free fatty acid content. It must not exceed 0.8 grams of oleic acid per 100 grams.

The following table compares the nutrients contained in one tablespoon:

They both contain many of the same nutrients, some in different amounts. After looking at the table above a common question asked is, which is healthier?

Let’s examine the nutrients of both oils and compare their percentages. 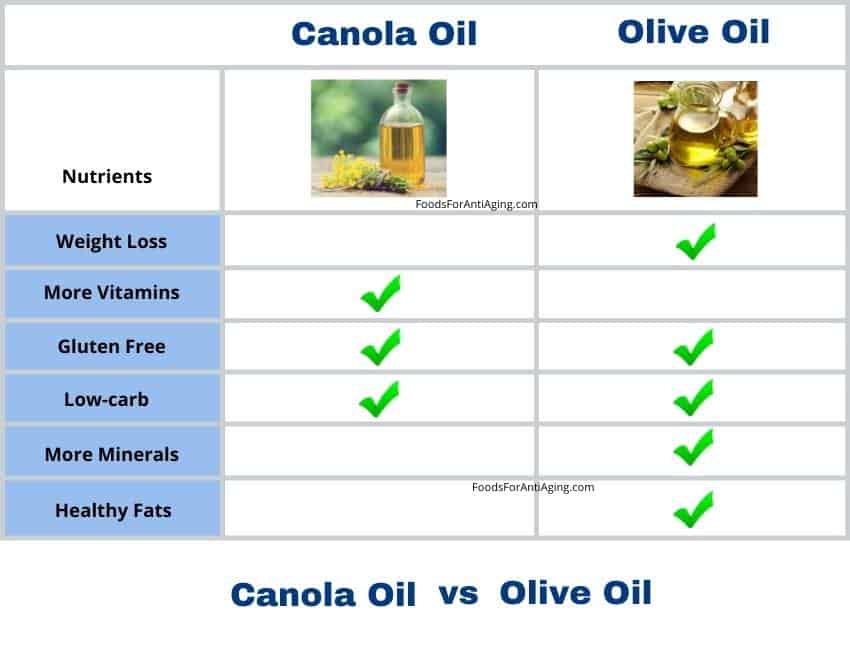 Choosing which oil may depend on your particular goal. The most common goals are examined in this section and determined which is better for each one.

This may be the most popular goal. If you’re trying to lose extra pounds from the stomach area, the number of calories may matter to you.

Even though it is considered a healthy addition to your diet, at 119 calories per tablespoon the calories can add up pretty fast.

It’s easy to add multiple tablespoons of oil into a salad. Four tablespoons of either one add 476 calories to the salad. Always be aware of the number of tablespoons added and try not to overdo it.

If you’re trying to gain muscle mass while staying lean, the amount of protein and carbohydrates may make a difference in your choice. Let’s take a look at both and determine which is better for bodybuilding.

Olive oil is better for bodybuilding than canola oil due to its higher percentage of healthy fats and antioxidants, although they contain the same amount of protein and carbohydrates.

Consuming few carbohydrates while adding more healthy fat and protein is the goal of most low-carb diets. With such a restrictive carbohydrate intake, every gram of carbs may make a difference.

Therefore, let’s examine which one has fewer carbohydrates or more fat and protein.

For those people with Celiac disease or wish to avoid gluten in their diets, avoiding all gluten is the main goal. Therefore, let’s answer which one is gluten free?

Olive oil and canola oil are plant based and does not contain animal products making them both beneficial for vegans and vegetarians. 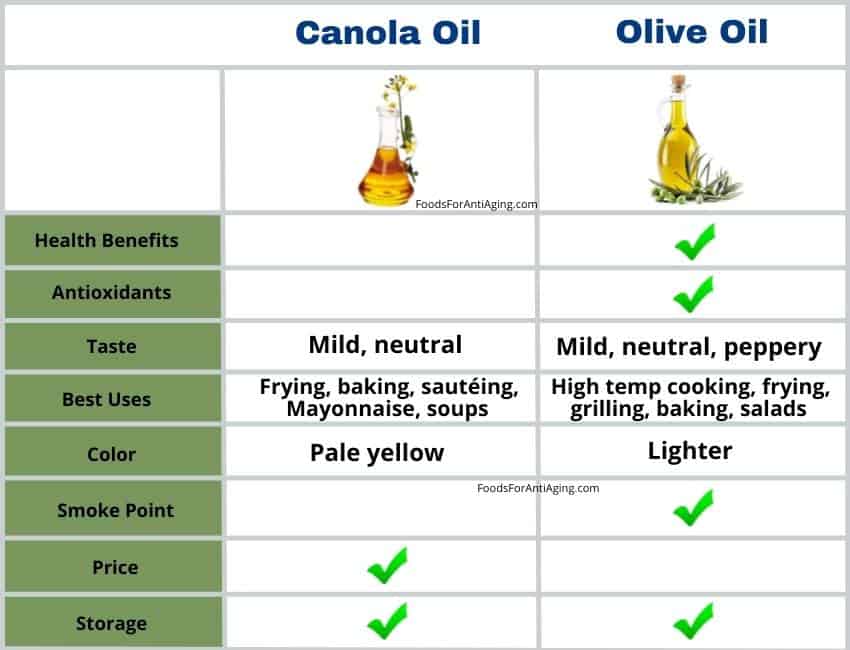 Let’s face it, If you’re like me I won’t eat a food considered healthy unless I can tolerate the taste. I think if someone doesn’t like the flavor of a food they won’t purchase it.

I wanted to get the opinion of real people like you by conducting some original research. Therefore, I reached out to some clients, members of food groups and readers. I asked, which one tastes better?

In the battle of taste, olive oil tastes better and was the winner in the poll.

I think it’s happened to all us, at the last minute you find out you’re out of the food needed in a recipe. Unable to go out to the store or just don’t want to, you’ve probably wondered if you can use another one in its place.

Reasons why people will want to substitute one for the other in a recipe:

This makes people wonder if it’s okay to substitute one for the other.

The following are the smoke points for each oil:

Some people like to use canola oil because it doesn’t overpower the other flavors in a recipe. Using it results in a neutral flavor and more people use it for cooking or baking than for dipping, salads or drizzling.

Use canola oil for the following:

Its seems every trip to the supermarket results with more money spent at the checkout. For this reason and others, I’m sure the prices of food matters to most people.

I checked the price of store brands to keep things on an even playing field. I divided the price by the number of ounces. Therefore, let’s examine the prices of each one.

Olive oil costs 84% more than canola oil per ounce. Olive oil average cost per ounce is $0.24 and the average price for canola oil is $0.13 per ounce.

Find out how the price of olive oil compared to avocado oil in my article, Avocado Oil vs Olive Oil: Which is Better? A Comparison.

Storing food often gets overlooked. The shelf life you get out of the oil is important, especially with the prices of a good quality brands. In addition, improper storage may lessen the taste and quality. Let’s examine how they should be stored.

They both can be stored the same way.

Store olive oil or canola oil in a cool, dark location away from light. It’s best to store either one in a tinted glass container. Both oils should be kept at a temperature between 55-60℉, although they can be refrigerated or frozen if needed.

If the temperature of a room rises above 70℉, they should be stored in the refrigerator. Leaving either oil in warmer temperatures affects shelf life and lessens the quality of the oil.

Unrefined oil or extra virgin can go bad quicker than refined oils. For this reason, many people store them in the refrigerator regardless of the room temperature.

Due to heat-creating appliances and heated ovens, kitchens tend to be warmer than most other rooms of the house. Therefore, be sure to monitor your oil and the temperature of the room.

There are many ways olive oil is beneficial for the heart including the following:

It is associated with decreases in inflammation which is a main component of heart disease. An antioxidant, oleocanthal, is an anti-inflammatory that also reduces pain 8.

It has been shown to help improve the lining of blood vessels. A study published in 2015 showed blood vessels opened up and increased blood flow in people who included it in their diet 10.

Several studies conducted on humans have shown the Mediterranean diet may be associated with a reduced risk of cognitive problems and dementia 12.

The cancer rates in Mediterranean countries are lower than other places.

Antioxidants are believed to contribute to the killing of cancer cells. In a 2015 study, oleocanthal, a phenolic compound present in olive oil, helped kill cancer cells in less than one hour 14.

Canola oil has some benefits of its own and also some concerns if consumed too much.

Omega-3 fatty acids is beneficial for the heart. Canola oil is higher in omega-3s than any other oil except for flaxseed oil.

It’s because omega-3 fatty acids help keep arteries healthy. The omega-3s may help with the following:

DHA and EPA, two of the fatty acids, are associated with lowering blood pressure and improving the health of blood vessels 16.

In addition, it contains a good number of monounsaturated fats. As noted above, they are extremely beneficial for the heart and increasing good cholesterol.

However, nutritionists have raised concerns about the high amounts of omega-6 found in vegetable oils. Moderation is the key and it’s better to use olive oil more often and when it makes sense.

Find out how olive oil compared to vegetable oil in my article, Olive Oil vs Vegetable Oil: Which is Better? Let’s Compare.

Grapeseed Oil vs Olive Oil: Which is Better? Let’s Compare

Butter vs Olive Oil: Which is Better? A Complete Comparison

Sunflower Oil vs Olive Oil: Which is Better? Let’s Compare